Loose coupling has been a Holy Grail for systems developers for generations.

The virtues of loose coupling have been widely lauded, yet there has been little description about what is needed to achieve loose coupling. In this paper we describe our observations from projects we’ve been involved with.

Two systems or two parts of a single system are considered coupled if a change to one of the systems unnecessarily affects the other system. So for instance, if we upgrade the version of our database and it requires that we upgrade the operating system for every client attached to that database, then we would say those two systems or those two parts of the system are tightly coupled. Coupling is widely understood to be undesirable because of the spread of the side effects. As systems get larger and more complex, anything that causes a change in one part to affect a larger and larger footprint in the entire system is going to be expensive and destabilizing.

So, the converse of this is to design systems that are either “loosely coupled” or “decoupled.” Loosely coupled systems do not arise by accident. They are intentionally designed such that change can be introduced around predefined flex points. For instance, one common strategy is to define an application programming interface (API) which external users of a module or class can use. This simple technique allows the interior of the class or module or method to change without necessarily exporting a change in behavior to the users. 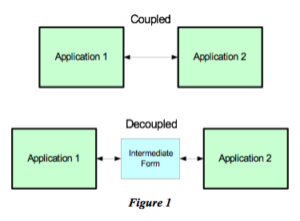 The Role of the Intermediate

In virtually every system that we’ve investigated that has achieved any degree of decoupling, we’ve found an “intermediate form.” It is this intermediate form that allows the two systems or subsystems not to be directly connected to each other. As shown in Figure (1), they are connected through an intermediary. In the example described above with an API, the signature of the interface is the intermediate.