We have been portraying the move to a Data-Centric paradigm as a “Revolution” because of the major mental and cultural shifts that are prerequisites to making this shift. In another sense, 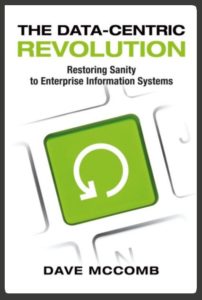 the shift is the result of a long, gradual process; one which would have to be characterized as “evolutionary.”

This column is going to review some of the key missing links in the evolutionary history of the movement.

Applications as Decks of Cards

In the 50’s and 60’s, many computer applications made very little distinction between data and programs. A program was often punched out on thin cardboard “computer cards.” The data was punched out on the same kind of cards. The two decks of cards were put in the hopper together, and voila, output came out the other end. Payroll was a classic example of applications in this era. There was a card for each employee with their Social Security Number, rate of pay, current regular hours, overtime hours, and a few other essential bits of data. The program referred to data by the “column” numbers on the card where the data was found. Often people didn’t think of the data as separate from the program, as the two were intimately connected.