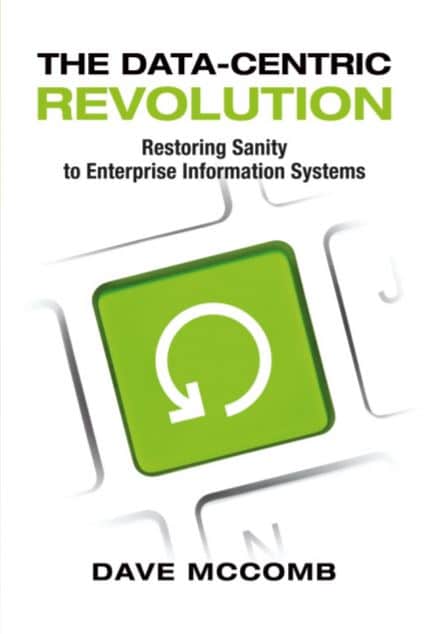 Below is an excerpt and downloadable copy of the “Chapter 2: What is Data-Centric?”

A data-centric enterprise is one where all application functionality is based on a single, simple, extensible data model.

The number of items in the schema directly drives the number of lines of application code that must be written and tested.  It also drives the complexity for the end user, as each item, eventually surfaces in forms or reports and the user must master what these mean and how the relate to each other to use the system.

Very few organizations have applications based on an extensible model. Most data models are very rigid.  This is why we call them “structured data.”  We define the structure, typically in a conceptual model, and then convert that structure to a logical model and finally a physical (database specific) model.  All code is written to the model.  As a result, extending the model is a big deal.  You go back to the conceptual model, make the change, then do a bunch of impact analysis to figure out how much code must change.

An extensible model, by contrast is one that is designed and implemented such that changes can be added to the model even while the application is in use. Later in this book and especially in the two companion books we get into a lot more detail on the techniques that need to be in place to make this possible.

In the data-centric world we are talking about a data model that is primarily about what the data means (that is, the semantics). It is only secondarily, and sometimes locally, about the structure, constraints, and validation to be performed on the data.

Many people think that a model of meaning is “merely” a conceptual model that must be translated into a “logical” model, and finally into a “physical” model, before it can be implemented. Many people think a conceptual model lacks the requisite detail and/or fidelity to support implementation. What we have found over the last decade of implementing these systems is that done well, the semantic (conceptual) data model can be put directly into production. And that it contains all the requisite detail to support the business requirements.

And let’s be clear, being data-centric is a matter of degree. It is not binary. A firm is data-centric to the extent (or to the percentage) its application landscape adheres to this goal.

Data-driven is not the opposite of data-centric. In fact, they are quite compatible, but merely being data-driven does not ensure that you are data-centric. You could drive all your decisions from data sets and still have thousands of non-integrated data sets.

We Need our Applications to be Ephemeral

The first corollary to the data-centric position is that applications are ephemeral, and data is the important and enduring asset. Again, this is the opposite of the current status quo. In traditional development, every time you implement a new application, you convert the data to the new applications representation. These application systems are very large capital projects. This causes people to think of them like more traditional capital projects (factories, office buildings, and the like). When you invest $100 Million in a new ERP or CRM system, you are not inclined to think of it as throwaway. But you should. Well, really you shouldn’t be spending that kind of money on application systems, but given that you already have, it is time to reframe this as sunk cost.

Data-Centric is Designed with Data Sharing in Mind

The second corollary to the data-centric position is default sharing. The default position for application-centric systems is to assume local self-sufficiency. Most relational database systems base their integrity management on having required foreign key constraints. That is, an ordering system requires that all orders be from valid customers. The way they manage this is to have a local table of valid customers. This is not sharing information. This is local hoarding, made possible by copying customer data from somewhere else. And this copying process is an ongoing systems integration tax. If they were really sharing information, they would just refer to the customers as they existed in another system. Some API-based systems get part of the way there, but there is still tight coupling between the ordering system and the customer system that is hosting the API. This is an improvement but hardly the end game.

As we will see later in this book, it is now possible to have a single instantiation of each of your key data types—not a “golden source” that is copied and restructured to the various application consumers, but a single copy that can be used in place.

Is Data-Centric Even Possible?

Further, they have no idea how a much simpler model could recreate all the distinctions needed in a complex business application. There is no such thing as an extensible data model in traditional practice.

You need to be sympathetic and recognize that based on their experience, extensive though it might be, they are right. As far as they are concerned, it is impossible.

But someone’s opinion that something is impossible is not the same as it not being possible. In the late 1400s, most Europeans thought that the world was flat and sailing west to get to the far east was futile. In a similar vein, in 1900 most people were convinced that heavier than air flight was impossible.

The advantage we have relative to the pre-Columbians, and the pre-Wrights is that we are already post-Columbus and post-Wrights. These ideas are both theoretically correct and have already been proved.

To fix your wagon to something like this, we need to make a few aspects of the end game much clearer. We earlier said the core of this was the idea of a single, simple, extensible data model. Let’s drill in on this a bit deeper.

Use the code: SemanticArts for a a 20% discount off of Technicspub.com