This blog follows from a recent blog by Dan Carey called Screwdrivers and Properties. It points to a longer whitepaper on the topic of avoiding property proliferation.

One way we keep the number of primitives small is to avoid creating a subproperty if its meaning is essentially the same as the superproperty, but has a more restricted domain or range. We illustrate this with an example in the genealogy domain. Suppose we have the property myeo:hasSibling and we want to model brothers and sisters. One way would be to create two subproperties, myeo:hasBrother and myeo:hasSister, whose ranges are myeo:Male and myeo:Female respectively, and define the class myeo:Brother as a property restriction class that means “any individual that is the brother of some person”.  In Manchester syntax, this looks like: “myeo:brotherOf some myeo:Person” where myeo:brotherOf is the inverse of myeo:hasBrother. Similarly we can define myeo:Sister as “myeo:sisterOf some myeo:Person”. This introduces two new classes and two new properties.

However, we can easily capture the semantics of brother and sister without introducing any new properties. We define the class myeo:Brother as “myeo:Male and myeo:siblingOf some myeo:Person” and myeo:Sister is defined as “myeo:Female and myeo:siblingOf some myeo:Person”. This way we can define the brother and sister concepts entirely in terms of existing primitives with the same number of classes and without creating any new properties.

The only thing that differs about myeo:hasBrother and myeo:hasSister compared to myeo:hasSiblingis that the former two properties have more restricted ranges (myeo:Male & myeo:Female vs. myeo:Person). Otherwise the meaning is identical.  We have essentially moved the semantics of brother from the domains of two new properties into the class expression that define the classes myeo:Brother and myeo:Sister  (see figure below).

Keeping the number of primitives low is not only more elegant, but it has practical value.  The fewer things you have, the easier it is to find what you need. Not only does it help during ontology development, it also helps downstream when others evolve and apply the ontology. 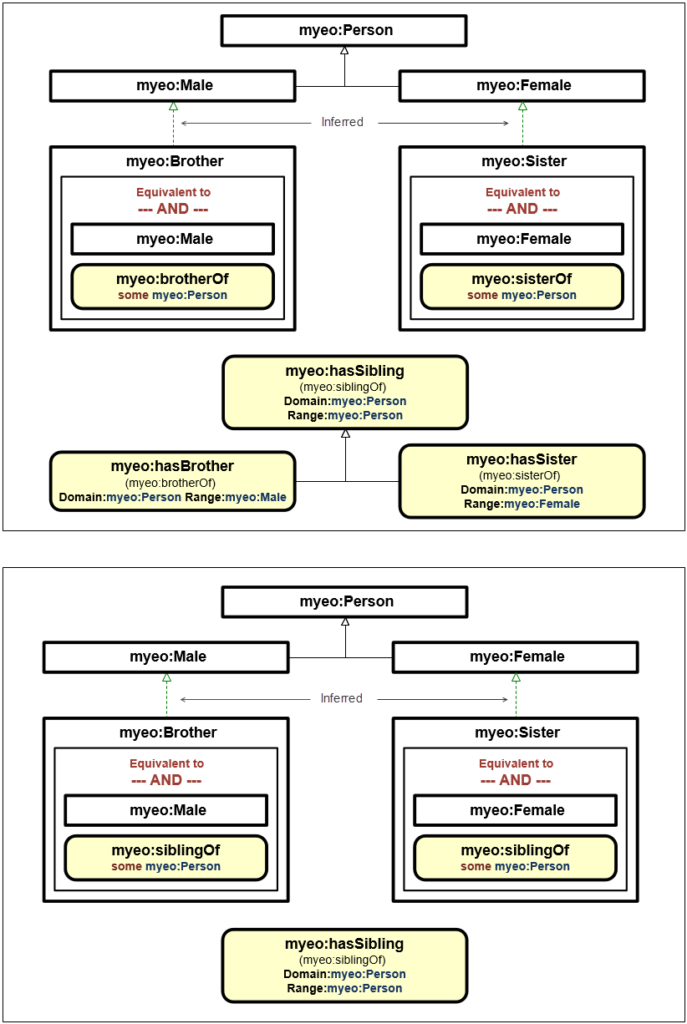